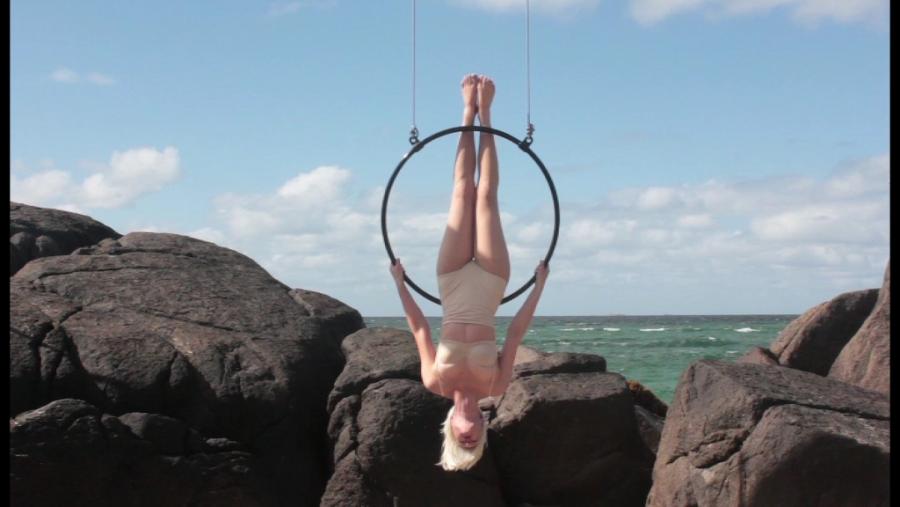 In partnership with NABROAD / Norwegian Collaborative Organisation for Contemporary Art Abroad, Sidsel Christensen has been commissioned to create a new moving image work in Berwick-upon-Tweed. Study for Composition X will be created on location, capturing the geological qualities of the landscape and coastal line using the human form; the artist’s body as an interactive framing devise.

Study for Composition X will be created on location in Berwick in August, capturing the geological qualities of the landscape and coastal line using the human form; the artist’s body as an interactive framing devise. This work is a development of a previous intervention in the landscape on the west coast of Norway, building on a series of video paintings commissioned by Open Gallery in London.

The piece specifically deals with how we see, and how we are placed, in the spaces that surround us, and how that has affected the history of landscape portraiture in art.

The work will be installed on two opposing screens: one presenting the original videos created in collaboration with Open Gallery on the Norwegian coast, in which the artist faces across the North Sea to the UK, and the other presenting the new work, to be filmed in Berwick, in which the artist will return her gaze over the water. Responding to the Festival’s theme, North by Northeast, the work will connect the two coastal locations.

Sidsel Christensen said today: “If you draw a line between Berwick and Norway on a map, the shortest, most direct line is hitting exactly the space in southwest of Norway, Ogna, where the my previous video was filmed. I am really happy for the opportunity this commission has given me, to be able to stretch the line of the gaze that far, in a way that seems both very physical and very conceptual at the same time."

Study for Composition X is being commissioned with the support of the Royal Norwegian Embassy and Arts Council England, in partnership with the NABROAD/ Norwegian Collaborative Organisation for Contemporary Art Abroad and Open Gallery.

Look out in the press or subscribe to the website as the full festival line-up announced – including film premieres and the promenade of artists’ video projections. Tickets will go on sale from mid-August.